Peterson Creek, the first creek north of Twentymile River along Turnagain Arm, flows out of a short valley and under a bridge on the Seward Highway near Mile 84. Over one hundred years ago, prior to the highway, the creek was a much more significant landmark along a narrow coastal travel route between Portage Bay and Cook Inlet settlements such as Knik and Sunrise. 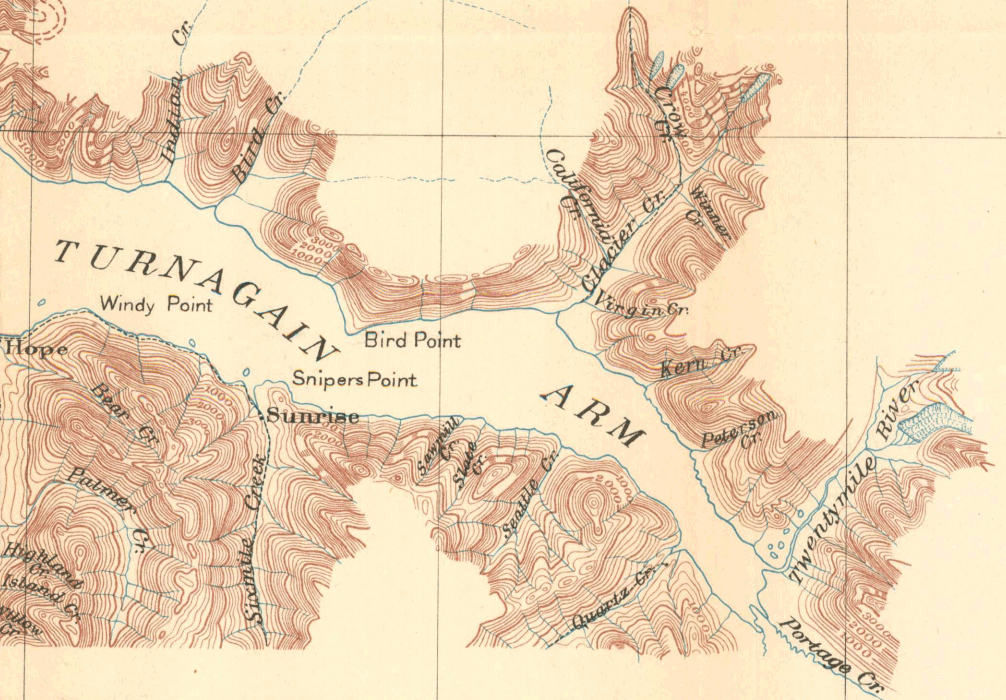 The Dena’ina name for the creek is currently lost, but the English name was bestowed in 1898 by a pair of gold prospectors named Alfred L. Howard and W.J. Parker. On March 20, 1898, W.J. Parker staked the ‘Gertrude Placer Mine Claim,’ stating “Peterson Creek is the first creek that runs into the Arm on the north side or right side on coming down the Arm from 20 Mile River and is on the same side of the Arm as 20 Mile River.” On the same day, Alfred L. Howard staked the ‘H+S’ Placer Mine on behalf of two individuals who he was acting as an agent for: “By the power vested in me as Attorney for Selma Peterson and Hulda Peterson, I do this day locate for them a 20 acre placer mining claim on Peterson Creek.”[2] The ‘H+S’ almost certainly stands for Hulda + Selma, and ‘Peterson Creek’ is almost certainly named for them.

Records for Parker appear sparse, but Alfred Howard is listed in the 1900 Alaska Census as a resident of Hope. He was born in 1848 in Iowa, moved to Alaska in May 1896, and was married to a wonderfully named Wealthy A. Howard.[3] Alfred Howard died suddenly of heart disease in the fall of 1903, and his wife returned to Michigan.[4] A sensationalist newspaper tried to tie his death to shock from the detonation of a local bridge with stolen dynamite, but was rebuffed by local fact-checkers.[5][6]

It is unclear how they crossed paths with Alfred Howard, but Hulda and Selma Peterson were sisters dispatched by the Swedish Evangelical Mission Covenant to work as teachers on Yakutat. According to the 1895-1896 Report on Education in Alaska, Selma arrived first: “1892, Miss Selma Peterson and Miss Anna Carlson were sent to Yakutat. […] 1896, the society called two school-teachers, […] one, Miss Hulda Cecilia Peterson, for Yakutat.” The full Yakutat staff at the time consisted of “Rev. and Mrs. Albin Johnsen, Rev. K.J. Hendricksen, Miss Selma Peterson, Miss Hulda C. Peterson.”[7]

A year after the name was established, in 1899, Lieutenant Joseph Herron passed through Turnagain Arm on a military expedition with orders to follow “a local route about 75 miles long connecting Portage Bay and Knik Arm” and evaluate its suitability as a potential mail route. At the time, Herron "found Portage Bay uninhabited, likewise the Twenty-Mile River Valley" but did find campsites from two small native hunting groups. On Turnagain Arm side Herron’s party met a Mr. Munger and a Mr. Hansen of Sunrise and spent time in Sunrise itself.[8] Those interactions are the likely sources of the local names in use. The fact that Herron came across the name 'Peterson Creek' in 1899 but the previous Glenn Expedition had not encountered it in 1898 is a further confirmation of the timeline of the name’s establishment.

Little else is currently known about Hulda and Selma. Hulda Peterson appears to have lived in the region and received mail in Seward at least until 1919, based on a public notice of pending mail.[9] Selma appears to have died relatively young. On November 6, 1905 she (surname spelled ‘Pederson’) was married in Yakutat to a Japanese man named Ketaro Soto.[10] Two Selma Petersons are listed as teachers in the 1906 Report on Education, one in Juneau and one in Tee Harbor,[11] which could indicate identically named individuals or a transfer and an artifact of recordkeeping. The Choss Lore project has not found a direct notice of Selma’s death, but Ketaro Seto was recorded in the 1910 census as a widower living in Cordova.[12] To this day, the Peterson family remains a pillar of the community of Yakutat,[13] and the small trace of their family continues to flow into Turnagain Arm.