Some features have an esoteric backstory and were named by enigmas who disappeared into history without a trace. Some were named because they look like a walrus, by people who are still kicking around and respond to emails. And yet, even those clearcut stories can have their twists and turns…

On August 11, 1972, two years after the establishment of the Chugach State Park, Greg and Loretta Higgins were traveling a circuit connecting the Middle and North Forks of Campbell Creek around the base of the mountain ridge between Wolverine Peak and Mt. Elliott. The route does not have a strongly established name, but is recognized as the ‘Williwaw Traverse,’ the ‘Williwaw-Long Lake Traverse,’ the ‘Long Lake Loop,’ and similar variants.

Greg and Loretta originally chose the name ‘Walrus Lake’ for the lake labeled Lake 2820 (based on its elevation in feet) on the 1960 USGS A-7 quadrangle map[1] and the 1994 updated version. Greg explains “We picked the name from its shape when seen from above as we were heading towards the pass that leads to Campbell Creek's North fork.” “We went east to that lake with a tail like extension to the west.”[2] From that perspective, the intended Walrus Lake does look like a walrus lounging on an ice floe.

However, the walrus began to migrate thanks to two factors: Greg Higgins left Alaska in 1974 for medical school, and most lakes can resemble a rotund mound of blubber if you squint hard enough. The name remained in local use but, with no single point of authority to consult, hikers applied it to whichever lake they personally considered to be most ‘walrus-y.’ An enduring source of confusion arose when cartographer Dave Imus arrived in 1999 to design his map of the Chugach State Park, which was the first commercial map to label the lake due to his choice to include unofficial names in local use. The initial draft of the map labeled Walrus Lake in the intended spot, but well-meaning sources mistakenly told him that Walrus Lake was to the northeast, the largest lake in the Middle Fork valley.[3] As a result the primary version in circulation misplaces the label, and the mistake was repeated on the later National Geographic Trails map. Alaskan mountaineer Tom Choate has heard the names ‘Upper Walrus Lake’ and ‘Lower Walrus Lake’ in use for the Imus-labeled lake and the originally-intended lake. Other locals such as Josh Gray and Sophie Tidler have understood a third option, the highest-elevation lake at the base of Mt. Williwaw, to be Walrus Lake or at least Upper Walrus Lake. Still others, relying on written descriptions or word of mouth, have imagined it as far away as Black Lake.[4]

The source of the ambiguity is that, with the exception of Long Lake, none of the many lakes in the Middle and North Forks of Campbell Creek have names officially recognized by the federal government. Even the nebulous “Williwaw Lakes,” which does appear as a label on USGS maps, is not a defined set of water bodies. Deep Lake and Black Lake near O’Malley Peak are the most strongly established local names, sometimes even appearing on select municipality maps,[5] but most are relatively fluid depending on who you ask and when. After an open discussion in February 2021, the following maps were compiled of the most commonly understood names - Then and Now. Click on the maps for more information and a zoomed view. 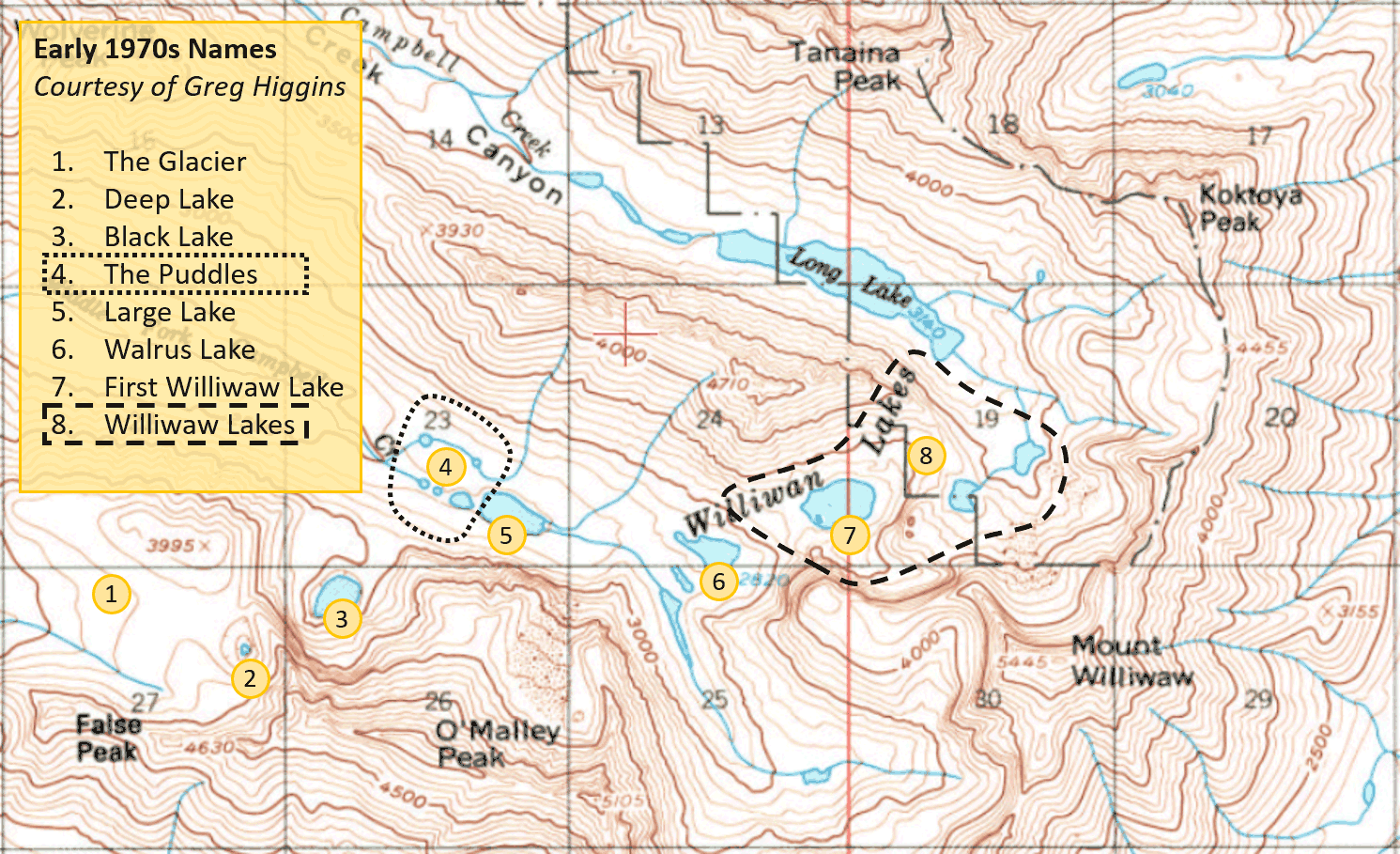 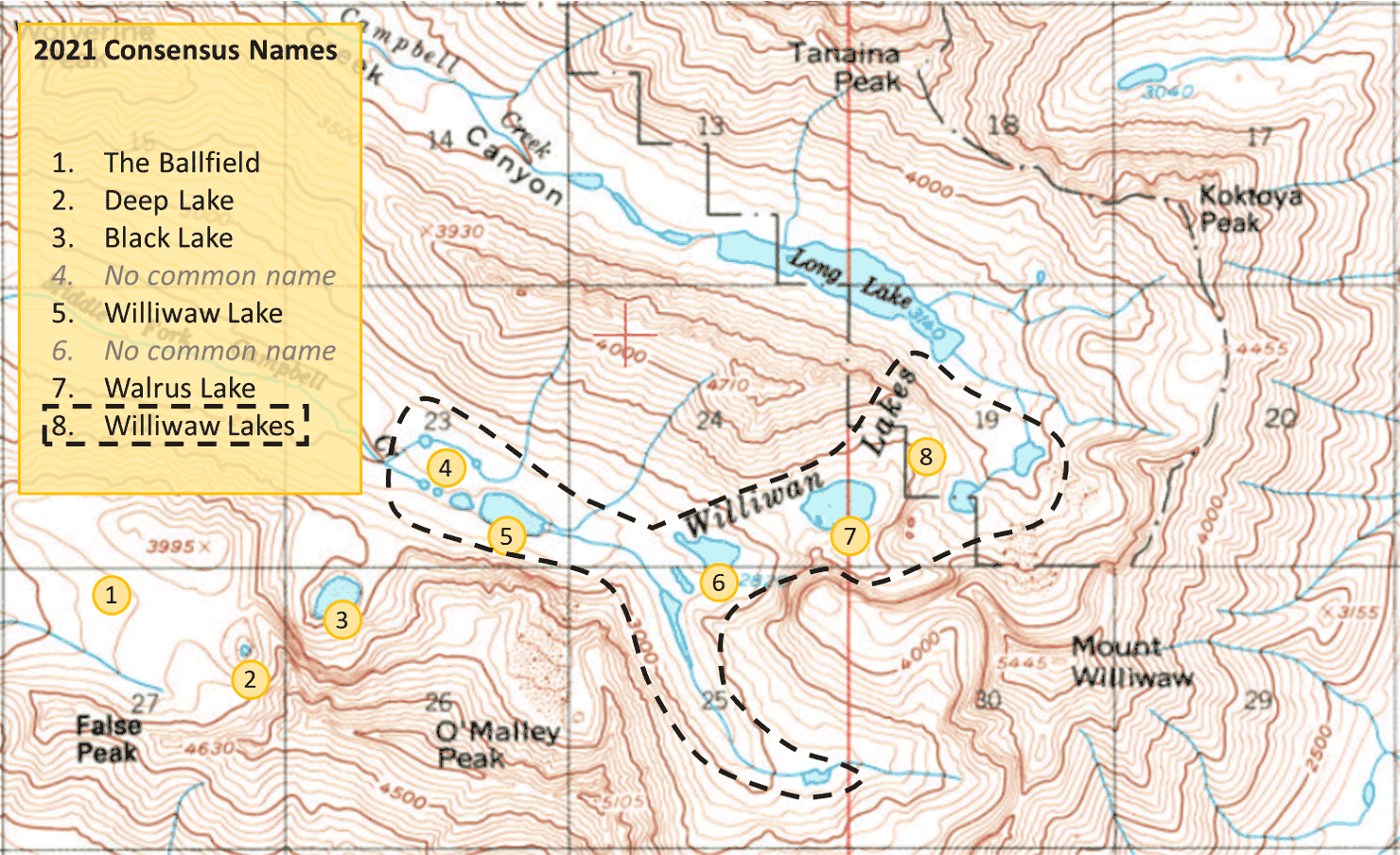 With gratitude to Greg Higgins, Steve Gruhn, Wayne Todd, and various members of the Mountaineering Club of Alaska for sharing their understandings of ‘Walrus Lake.’

Best Interpretive Art - local Josh Gray’s interpretation of the highest-elevation lake in the valley as ‘Upper Walrus Lake.’ The original Walrus Lake is hidden by the mountain ridge in the left foreground; the lake commonly referred to as 'Walrus Lake' today is partially visible behind the same ridge. The lake pictured has long been considered one of the Williwaw Lakes, and was known as the Second Williwaw Lake in the 1970s, but is not commonly referred to as 'Walrus Lake' or any variation. 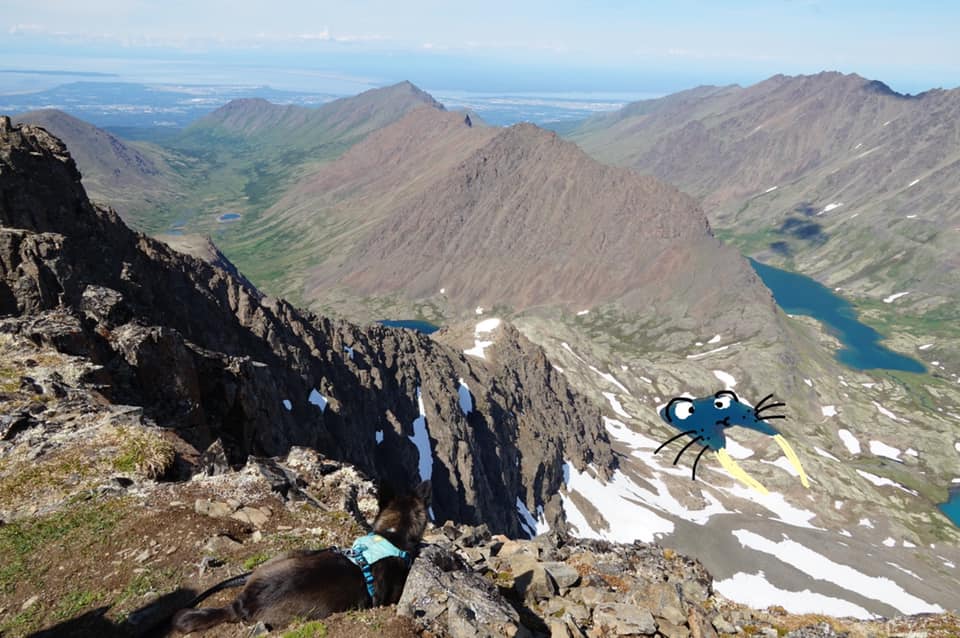