In 1966 there were “16 families, with a total population of about 30”[1] in the Highland Hills area which has since become the extended neighborhood along Hiland Road in the South Fork of Eagle River. The list of geographic names for features in this secluded area was even more sparse: Dena’ina names were being lost with a dwindling set of local native speakers, and few English names had yet been assigned. The names Eagle River and its South Fork, Eagle Lake, and Organ Mountain were in official use.[2] Eagle Peak[3] and Polar Bear Peak[4] were by that point recognized among mountaineers and local homesteaders. Dena’ina names for the South Fork (Na’un Tutsughala Betnu) and a mountain ridge (Na’un Tutsughala) near what would eventually be named Hurdygurdy Mountain still survived in the minds of some speakers,[5] and the anglicization Yuklahitna (Nuk’elehitnu) for Eagle River had been published by Mendenhall. At the head of the southern ridge, the Nike Site Summit missile base had been built in 1959[7] and names related to Anchorage culture and development were literally appearing on the horizon, including Rendezvous Peak in 1963 and Mt. Gordon Lyon in 1964.[2]

In that same timeframe the Mountaineering Club of Alaska, particularly one of its influential leaders – J. Vin Hoeman – advocated for creating “simple, unusual, alliterative, non-eponymic, and descriptive names […] for features in the mountain areas with which we are familiar.”[8] The Club’s Committee on Geographic Names regularly collaborated to propose names for features, which would then be more firmly established by climbing trips producing trip reports and summit registers, and to collect and disseminate names which had already been proposed by recreators and local homesteaders. Two notable guidelines they established for themselves stated that:

“Attempts will be made to adhere to a central theme in areas where several features are to be named; [… and] we will avoid naming features in areas not yet explored on the ground, for to name them would rob their future explorers of the privelege [sic].”[8]

During one such meeting in 1967, MCA member Bill Hauser proposed the name “Symphony Lake” for the small lake next to Eagle Lake at the head of the South Fork valley. Inspired by Hauser, the group immediately proposed ‘Cantata Peak’ to fit the theme as well.[9] In the coming years, the orchestra pit would fill with Harp Mountain, Flute Peak and Glacier, Hurdygurdy, Calliope, Triangle, Concerto, Synthesizer, and a suite of minor features such as Andante and Allegro.

But ‘Symphony’ was not the first suggestion for the lake. A year before, U.S. Survey #4913 had established two 5-acre lots “at the northern tip of a small lake near the headwaters of South Fork Eagle River.”[10] The parcels were connected to Joe and Phyllis Janke, who homesteaded at South Fork in 1958, and planned to develop tourist cabins there. In that survey, the lake was labeled “Little Trout Lake,” which Phyllis Janke has stated was a name in use among the local homesteaders at the time.[11] Their plan was ultimately abandoned and the land was permanently withdrawn with the establishment of Chugach State Park in 1970.[12] The first proposed English name for the lake also faded from memory, leaving the sturdy hexagonal cabin structure on the glacial moraine and a brass capped iron post nearby as the remnants.

Consider for a moment which way the character of the region may have swung if it was anchored by Eagle, Polar Bear, and Little Trout as opposed to Organ, Symphony, and Cantata. Names related to flora and fauna abound throughout Alaska, but the musical theme of South Fork is unique and delights both residents and visitors. And that all comes down to a building season in 1966, when a little trout slipped away, and a few hours in 1967 when some mountaineers held a jam session. The maps of Alaska have an infinity of those little “what-if” moments where a slightly different chain of events could have completely altered our perception of the landscape without changing the physical geography at all, and that strikes a grand chord with this project. 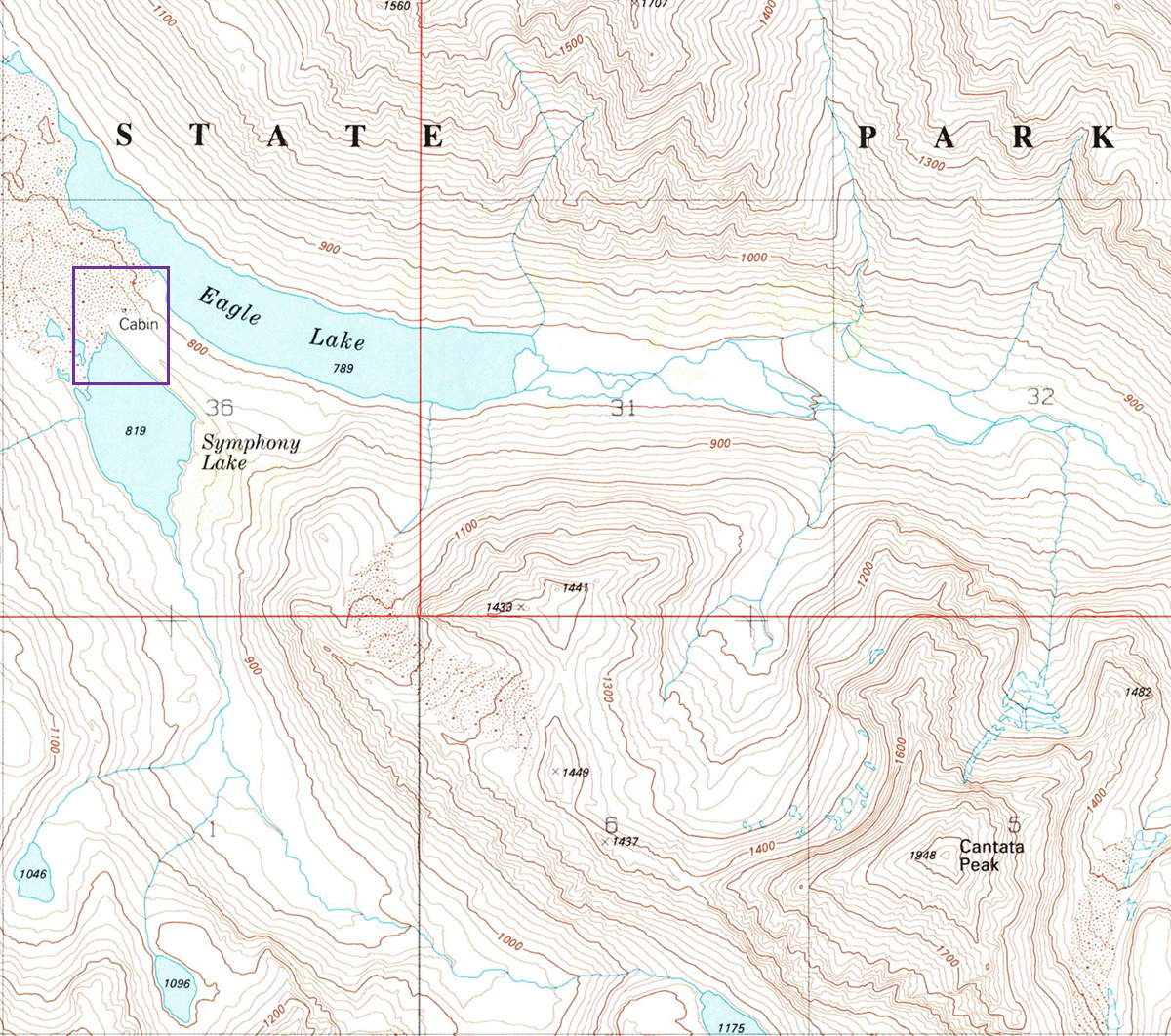 With gratitude to David Horst and Steve Gruhn for mentioning the Janke connection to the cabin ruins in 2017.

[6] Mendenhall, Walter C. “A Reconnaissance From Resurrection Bay to the Tanana River, Alaska, in 1898” in Annual Reports of the Department of the Interior. Annual Report 20. Washington, D.C: Geological Survey (U.S.), 1900. https://pubs.usgs.gov/ar/20-7/report.pdf

[9] Courtright, Karen. “A Note on the Name ‘Cantata Peak.’” The Scree, Mountaineering Club of Alaska, December 1967.