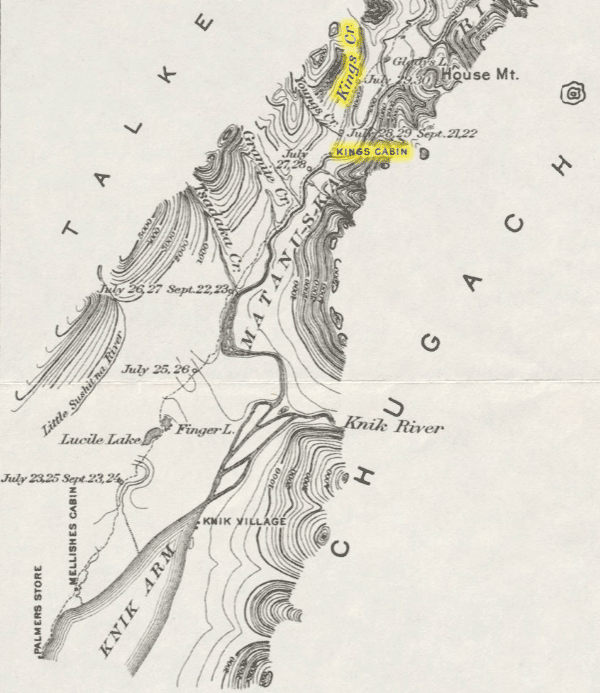 Alaska may have been sold by Tsars and purchased by Presidents, but some of the first English-speakers to appraise it were Kings. Lieutenant James King was assigned by Captain Cook to lead the landing party on Point Possession in June 1778[1]; a few months later Cook named King Island, near the Diomede Islands, for him[2]. A prospector named George C. King and two partners were some of the first Americans to ascend the Kuskokwim in 1881[3]. The King who made the biggest mark on Southcentral Alaska, however, was named Al.

Biographical details are sparse but reveal a frenetic life, assuming they all refer to the same man. If so, in roughly thirteen years Alexander King singlehandedly kicked off the Cook Inlet gold rush, prospected the Kuskokwim and Nushagak basins, homesteaded in the Matanuska Valley and became the namesake for Kings River, prospected for gold near Yakutat by way of Juneau and for copper around Mt. St. Elias and was finally arrested and hanged for the murder of a bumbling river pilot in the Yukon.

It is certain that Kings River, a tributary of the Matanuska originally named ‘Kings Creek,’ was named for a prospector named Al King who lived in the area around 1898. Both creek and cabin are also shown on a map surveyed by Mendenhall as part of the Glenn Expedition[4], which passed through the area in July 1898. From Marcus Baker’s 1902 Geographic Dictionary of Alaska[5] (USGS B187) we know that Kings Cabin was the “home of Al. King, a prospector, at junction of Kings creek and Matanuska river.” Baker also wrote that Kings Creek was “known locally. Presumably named after Al. King, one of Alaska's pioneer prospectors.” The Pioneers of Alaska seemed to confirm this link in the January 1920 edition of The Pathfinder[6] by stating that "a year or two before [Harry] Hicks made his first trip in this region [ca. 1895] a prospector named King built a cabin at the mouth of the tributary to the Matanuska which now bears his name."

So the Al King of Kings River was an experienced Alaskan prospector prior to 1898, but where did he gain his experience? An Alexander King was first spotted in southcentral Alaska prospecting on the Kenai Peninsula. In their book Aunt Phil's Trunk, vol. I,[7] Laurel Downing Bill and Phyllis Downing Carlson summarize a story told by historian and longtime Alaskan Mary J. Barry in her A History of Mining on the Kenai Peninsula[8]:

After King departed the Kenai Peninsula in 1900, he may have headed westward. In his report of A Reconnaissance of Southwestern Alaska in 1898[9], J.E. Spurr noted this previous expedition to the region: "About 1890 three prospectors, Harry Mellish, Percy Walker, and Al King, are said to have ascended the Mulchatna, the chief tributary of the Nushagak, 200 miles, and there to have found gold, which, however, was too fine and flaky to save."

In Dale Stirling’s 1980 paper History of Waterbody Use on the Nushagak River System[10], he cites a more detailed account from Spurr which this author could not locate in the version of the report currently available online.

And what may have happened to Al King in the years after the government expeditions of 1898? In an August 1900 issue of the Douglas Island News[11], Edward Hibbard reported meeting "Al King, an old prospector who had knocked about Alaska since 1894" "at Juneau during the rush of 1897." Hibbard, King, and a third partner named William Murdock had unsuccessfully prospected Yakutat beaches together, and from there King and Murdock had gone inland to prospect around Mt. St. Elias. An interesting letter Hibbard received from Murdock in early 1900 recounted that the pair had found an abandoned copper mine at about 6000’ elevation “which had been worked ages before by some people, presumably early Russians, possibly natives, who had inhabited that district."

Alexander King appears one more fateful time, this time further east across the border in the Yukon Territory. In July of 1900, slightly before the Douglas Island News published the letter of King’s activity in 1898-1899, Canadian newspapers were abuzz with the story of Alexander King murdering Herbert Davenport. Davenport and King were both on the crew of a Yukon riverboat, and Davenport had enraged King by stranding the boat on too many sandbars near the mouth of the White River. The Dawson Daily Klondike Nugget contains the most complete report[12]. King was reported to have exclaimed "Captain, you have bum-fuzzled us fellows long enough," (or some unprintable variant there-of) before shooting Davenport with his rifle in front of eyewitnesses, whom he then threatened to keep quiet. King was described as "not less than 65 years of age. He is short and thickset; wears a heavy full beard which is nearly white. He claims to be from Sacramento, California, and says he was in this country 13 years ago [1887]. In appearance he is a typical old miner."

Barry, in her History of Mining on the Kenai Peninsula, disputes this description, stating "He apparently looked much older than he was. His acquaintances called him "Dad" and they all thought he was more than 65 years of age. However, he said he was 56 years old and had been born in Ohio, one of six brothers. He had prospected and mined in California before coming to the north in 1887. That year, he was reported to be at the headwaters of the Yukon." 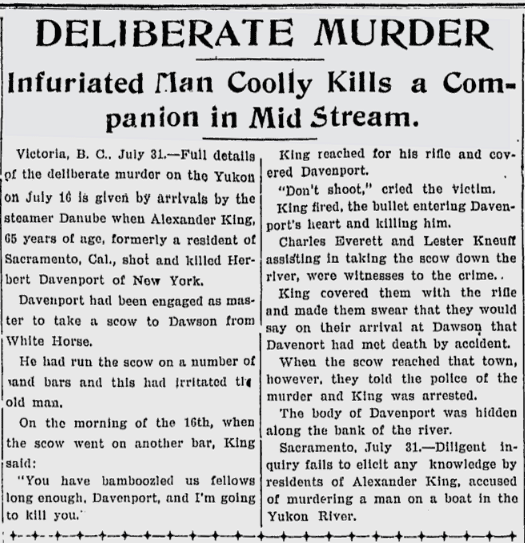 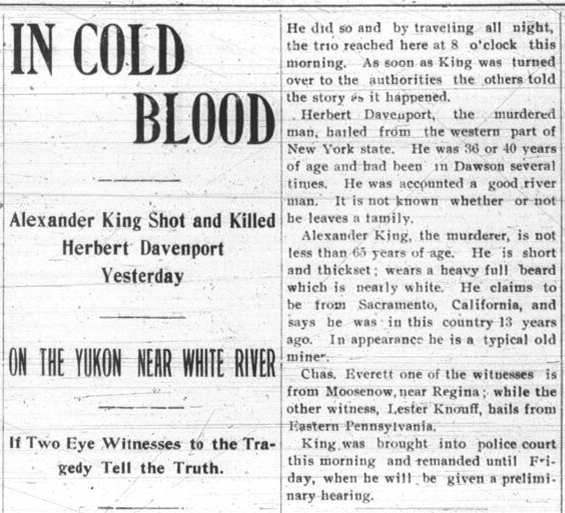 In any case, the crew members did not keep quiet, and King was arrested on arrival in Klondike City. After a jury trial he was hanged by the Royal Canadian Mounted Police on October 2nd, 1900.[14]

Assuming every mention of Al King refers to the same person, the following is a plausible timeline of his travels through Alaska: