This is article does not adequately cover the complex history of the coal industry in the early 1900s. Future updates will seek to fill in more details about Jennie Purinton. Future articles on e.g. Coal Creek, Carbon Creek, and Anthracite Ridge will seek to describe the conflicts between industrial coal miners and the existing Ahtna population of the Matanuska Valley, and between American society, the Roosevelt administration, and large industrial syndicates over workers rights, conservation, and natural resource extraction.

For miners who were not "urged by the arch-tempter — Gold"[2], coal was a sensible alternative. Between 1900 and 1910 coal reached its peak of importance as a fuel source, supplying over 70% of the energy used in the United States.[3] [View Graph] Alaskan coal fields were appraised with great interest, both for the national energy market and in anticipation of local railroad construction which was expected to cut transit times and spur further development. The Matanuska River Valley was identified as a rich potential source of coal and in 1905 USGS geologist George C. Martin was one of the scientists sent to appraise it.[4] His description of the multiple days of travel required despite a 'good horse trail' underscores the promise which railroads and coal-fired locomotives represented in the minds of American settlers arriving in Alaska at the time:

American citizens could initially file coal claims on public lands in Alaska, just as they could for gold, until President Roosevelt ordered a halt to coal mining on all federal lands, including Alaska, on November 12, 1906[5] amid growing concerns about industrialization, business monopolies and the importance of conservation. One of the claims granted to an individual was the Purinton Coal Claim, staked on June 28th, 1905 for Jennie Purinton by her agent Thomas H. Jeter of Seward.[6] The claim was located “on the west bank of a deep ravine that crosses the Horse Trail about four miles East of Wolf Creek (or Boulder Creek it is sometimes called)” and Jennie Purinton is almost certainly the origin of the name Purinton Creek, a tributary of Matanuska River. 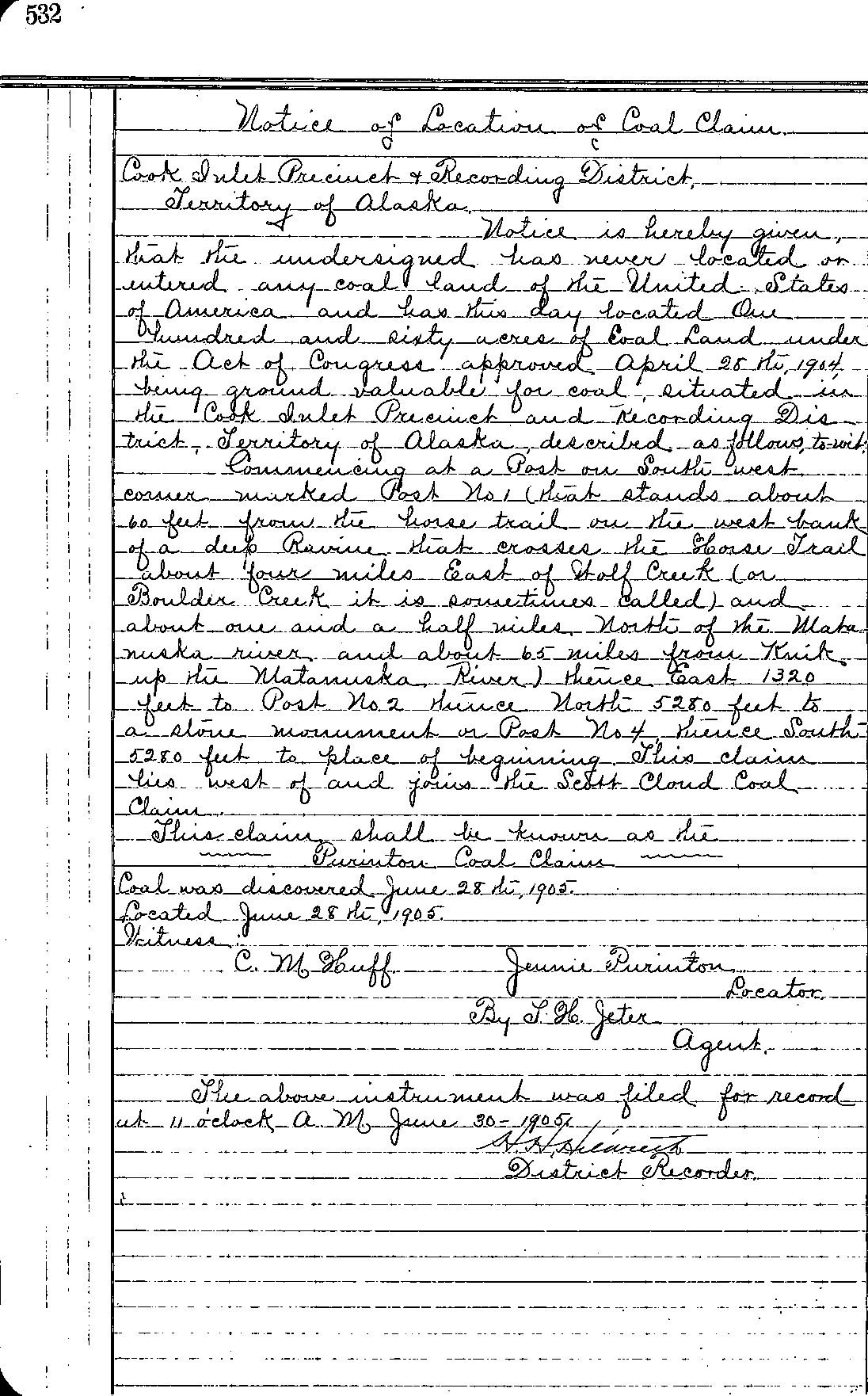 The Horse Trail, which later became known as the Chickaloon Knik Nelchina trail, is shown on Gerdine and Sargent's 1907 Reconnaissance Map of Matanuska and Talkeetna Region, Alaska[7] and crossed through the region at the base of Anthracite Ridge uphill from the modern Glenn Highway. Purinton Creek is closer to 5 miles from Boulder Creek, but does flow through a deep ravine at the site where the trail once crossed. The 1951 topographic map of the Anchorage quadrangle[8] shows the trail in the same location, but in later maps produced in 1962, 1979 and 1994 it is shown following switchbacks down to meet with the modern highway. 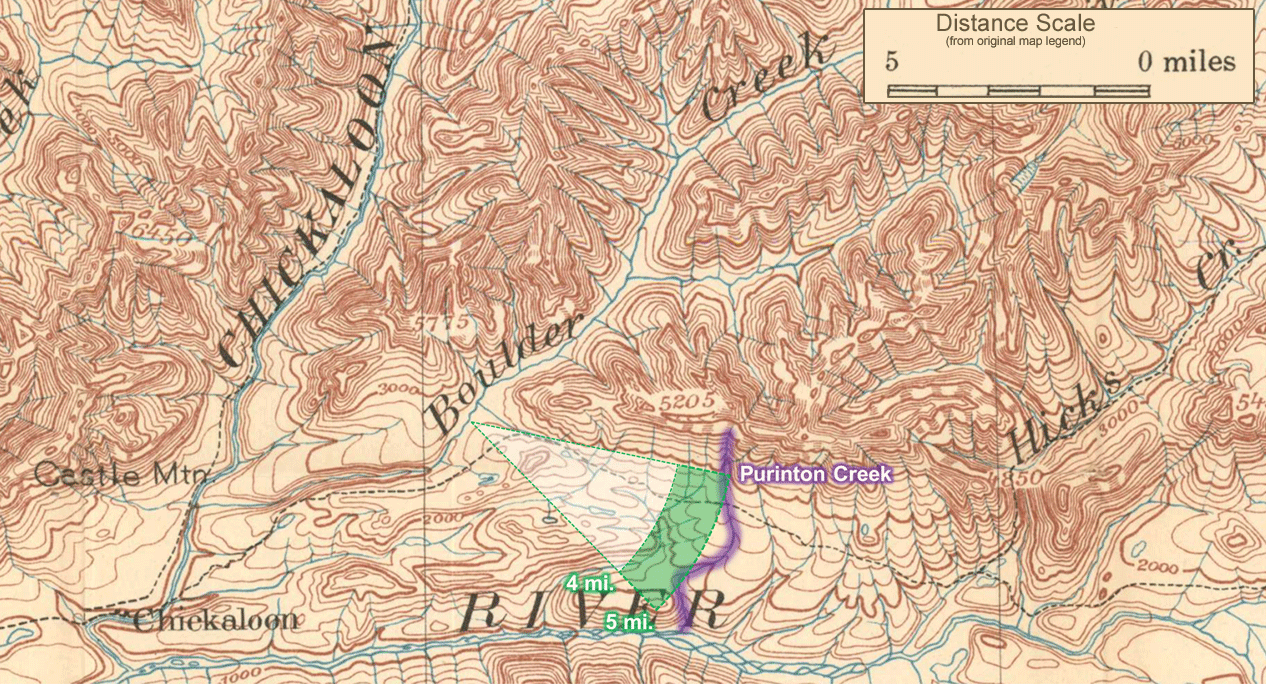 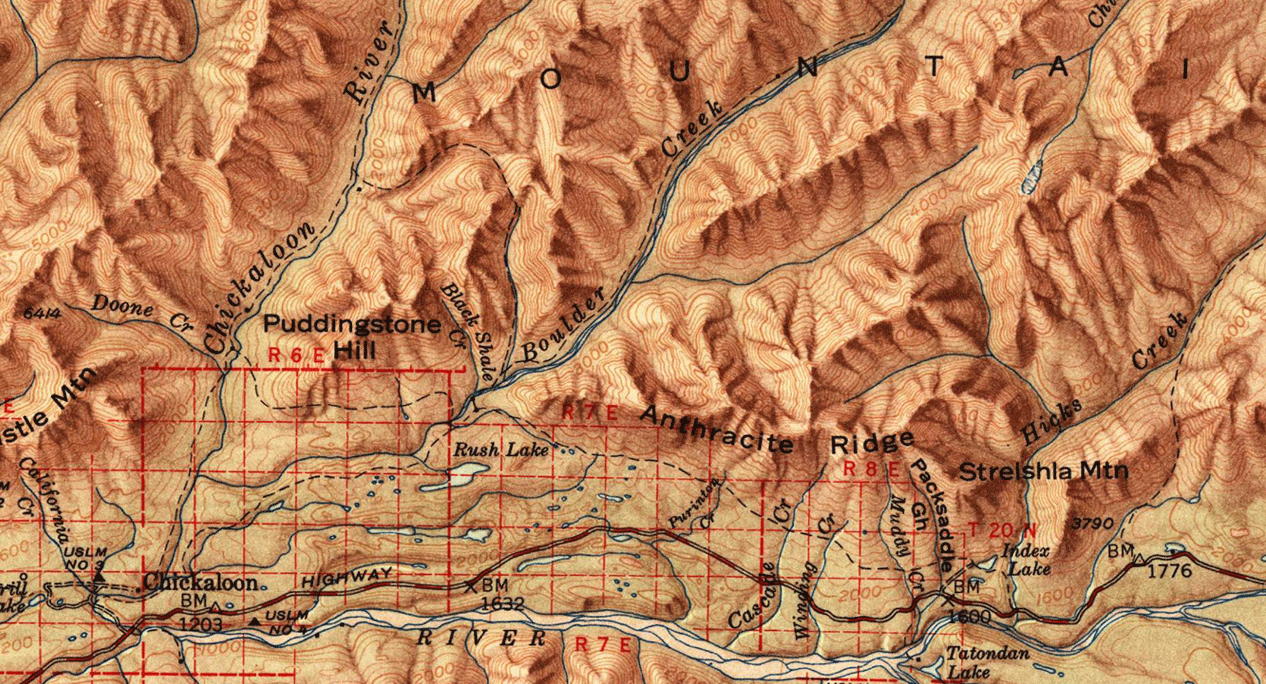 It is unclear how much time Jennie Purinton or her relatives actually spent in the area. Records are sparse to begin with, of course, but this author could find no further trace of the Purinton family. In most cases, an individual had to have an enduring connection to an area before a geographic name referencing them could stick. However, the short amount of time between the establishment of the claim and a visit by a government surveyor with the power to cement the proposed name into the public record may have short-circuited the typical process.

G.C. Martin, in his Preliminary Statement on the Matanuska Coal Field[4], stated "The writer spent about three weeks in this field in the summer of 1905 and visited the region immediately adjacent to Matanuska River from Knik Arm nearly to the mouth of Hicks Creek." (B284 p.88) This would indicate that he heard the name within weeks of Jennie Purinton becoming associated with the creek. In the full report resulting from the survey, Bulletin 289,[9] he also thanks Thomas Jeter and several other local agents for extending "courtesies in the field and elsewhere." (B289 p.5) Martin also sampled a vertical section of ground at Purinton Creek to estimate the volume and value of coal in place there (note that this page is missing from the version of the report currently available online). It is plausible that Martin recorded the name directly from Jeter during his field work, and even possible that the name ‘Purinton’ was applied on-the-spot to provide a name for the sample location.

If Purinton has a longer-term connection to the Matanuska Valley which is currently undiscovered, she or her relatives were likely to have arrived after 1894. Although there are several reports of English-speakers exploring the valley before then, Martin stated “The occurrence of coal in this region was first learned from the Indians by prospectors and traders in 1894.”(B289 p.5)

There is also some evidence to suggest personal connections between Thomas Jeter and Jennie Purinton, although definitive proof has not yet been found. On the same day that Jeter filed the Purinton Coal Claim, he also filed adjacent coal claims for John Toler, Lulu Cloud, Richard Gilleneau, S.G. Harris, Z.N. Goldsby, Scott Cloud, Archie J. Cloud, Melvine Dempsey.[6] A family record on a public genealogy forum revealed a family record[10] View Copy. for parents William Henry Cloud and Mary Luella ‘Lulu’ Cloud, née Goldsby, with children Scott Goldsby Cloud, Archibald Jeter Cloud, and William Frederick Cloud. The names suggest that the Clouds, Goldsbys, and Jeters were part of an extended family, and it is possible that Purinton and the others in Jeter’s group of claimants were relatives or perhaps family friends. The Purinton Claim was witnessed by C.M. Huff, all other claims were witnessed by W.J. Martin.

If you know more about Jennie Purinton, her family, or descendants, please contact the Choss Lore project at chosslore@gmail.com

[5] "Executive Order of November 12, 1906, All lands in the District of Alaska withdrawn from filing and entry under the coal land laws." https://books.google.com (accessed June 17, 2020)